In the first three verses of Psalm 1, we saw that the blessed person was characterized by delighting in and walking according to the Word of God. As we move into the fourth verse, we see a stark contrast. Emphatically, the psalmist states, “It is not so with the wicked.” The Septuagint (the LXX – the Greek translation of the Hebrew Old Testament) translates this as “Not so the ungodly, not so.” Just as the darkness makes us appreciate the light, so does wickedness make us appreciate righteousness. This picture of the wicked vivifies the metaphor in verse three.

The wicked are not so,
The wicked is the person who does not delight on the word of God. Spurgeon wrote that “we are hereby to understand that whatever good thing is said of the righteous is not true in the case of the ungodly.” All throughout the Old Testament, the wicked are the direct opposite of the righteous. The word ‘wickedness’ denotes evil thoughts, words, and deeds that are contrary to God’s character and hostile toward mankind.

Since wickedness is contrary to God’s nature, He takes a stand against it. David writes that “The wicked spies upon the righteous and seeks to kill him. The LORD will not leave him in his hand Or let him be condemned when he is judged” (Psa 37:32-33). But “[The LORD] will condemn a man who devises evil” (Prov 12:2). God takes a stand against the enemies of His servant: “Behold, the Lord GOD helps Me; Who is he who condemns Me? Behold, they will all wear out like a garment; The moth will eat them” (Isa 50:9). In the future Millennial Kingdom, God will defend His people: “‘No weapon that is formed against you will prosper; And every tongue that accuses you in judgment you will condemn, This is the heritage of the servants of the LORD, And their vindication is from Me,’ declares the LORD” (Isa 54:17).

But they are like chaff which the wind drives away.
While the righteous are like a thriving tree, the wicked are pictured as chaff. Chaff is the worthless husk that must be separated from grain. When wheat was harvested, the harvesters would crush the wheat with a threshing sledge. They would then throw in into the air in a breezy location. The wheat would fall the ground, but since it is lighter, the chaff would be blown away. This is a picturesque way of saying that the wicked have no value and will be removed.

That the chaff will be driven away by the wind “shows the vehement tempest of death, which sweeps away the soul of the ungodly,” writes Spurgeon. “Death shall hurry them with its terrible blast into the fire in which they shall be utterly condemned.” But the good news is that there is still time to repent. For the moment, chaff can still become grain. The wicked can become righteous. God sent His Son in order to redeem the wicked, and if any will but repent of sin and embrace Him as Lord, they will certainly be saved. We are all chaff when we enter this world. But through the grace of God, through the death of Jesus, we may become grain that will never see the fires of condemnation. Praise be to God who rescues sinners from the dark dominion of this world! 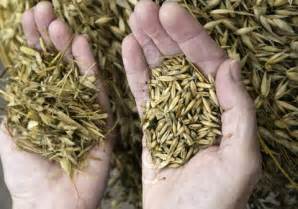 Sir Richard Baker wrote: “Here, by the way, we may let the wicked know they have a thanks to give they little think of; that they may thank the godly for all the good days they live upon the earth, seeing it is for their sakes and not for their own that they enjoy them. For as the chaff while it is united and keeps close to the wheat, enjoys some privileges for the wheat’s sake, and is laid up carefully in the barn; but as soon as it is divided, and parted from the wheat, it is cast out and scattered by the wind; so the wicked, whilst the godly are in company and live amongst them, partake for their sake of some blessedness promised to the godly; but if the godly forsake them or be taken from them, then either a deluge of water comes suddenly upon them, as it did upon the old world when Noah left it; or a deluge of fire, as it did upon Sodom, when Lot left it, and went out of the city.”
Posted by Pastor Tim at 11:00 AM